Special offers all year round 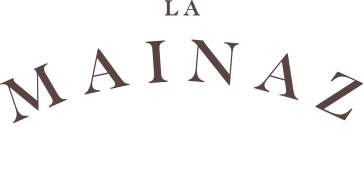 
Like the rest of the team, Anne-Isabelle Debreu-Barberet is literally fascinated by La Mainaz's setting – "a majestic, unique location"! Likewise, the finance & admin director highlights the team spirit that prevails at La Mainaz: she loves the feeling of having a common goal and working together to reach it. Her wish? That guests staying at La Mainaz experience this warmth and friendliness and that they feel at home!


He cut his teeth with the top Chefs at addresses each more prestigious than the last – Le Georges V, the Hotel Vernet, Le Bristol. Mathieu continued his rise and in 2016 took the helm of the kitchens of the Parisian restaurant l’Agapé, where he was rewarded with a Michelin star. He has also worked on the other side of the Atlantic, from where he returned with spices and new flavours!

Nowadays, Mathieu Sagardoytho has chosen a new environment to display his talents: La Mainaz and its exceptional panorama to offer sophisticated and creative French cuisine that respects the ingredients, striking the right balance between tradition and modernity! La Table de La Mainaz has flourished under the direction of this Chef unmistakably rooted in the local region, with a deeply ingrained taste for excellence! His ambition is to share and give diners a taste for good things in an authentic setting.


Alain Brunier has been the head of the Geneva Hotel School since 2005, after managing a host of prestigious establishments: the Impérial Palace when it opened, Les Airelles in Courchevel, Domaine de Divonne, which was awarded a Michelin star in 1995… he therefore knows the region well and has been frequenting La Mainaz for many years. He therefore enthusiastically agreed to advise the new owners when they decided to "wake Sleeping Beauty"! His role? To assist them with the strategic and organisational aspects.

Today, on the strength of a new team – he actively participated in its recruitment – La Mainaz can write a new chapter in its story. Alain Brunier loves the exceptional location and size of the establishment. He also trusts "the alchemy between the staff's professionalism and the owners' enthusiasm, which works wonders." His ambition for La Mainaz: "To immediately position it among the benchmark establishments for the Greater Geneva area. Given its exceptional location as a balcony over Lake Geneva and the Mont Blanc, on the edge of the Haut Jura Regional National Park, the quality of the renovations, the excellence of its cuisine and the know-how of the hosts, I am sure that La Mainaz will quickly become a must-visit destination and a key player in Geneva and Jura tourism."